In this report The Somerton Man’s code is at last deciphered to be a suicide contemplation note he drafted as a quatrain giving a gist of why and how he planned his last dance for a lasting life. It was the creative DNA of his suicide plot.

Note: The ePub ebook edition of this title (ISBN: 9781640980259) can be purchased from major online ebook stores worldwide.

The mysterious code appearing on the back page of a first edition copy of Edward FitzGerald’s The Rubaiyat of Omar Khayyam—found months following the death of The Somerton Man (TSM) in South Adelaide, Australia, on Dec. 1, 1948—was a suicide contemplation and planning note he was poetically drafting for himself in the form of a quatrain on the back of his copy of The Rubaiyat, giving a gist of why and how he planned to carry out a deliberately mystery-laden suicide as his last dance for a lasting life. The code was the creative DNA of his suicide plot.

It was written in the ‘Tamám Shud’ transliteration style—in this case not from Persian, but from Arabic with which he must have been familiar, either natively due to coming ancestrally from the ethnically diverse and widely multilingual Russian Caucasus and/or by training and education. In other words, the ‘Tamám Shud’ torn-out piece found in TSM’s fob pocket not only served as a bread crumb lead to his suicide note, it also offered the key to the code’s deciphering.

DNA is a self-replicating matter that reproduces the basic structure of a substance. TSM’s ‘code’ offers the DNA of his last dance performance in public hoping for a lasting life, one that was sketched amid his medical suffering. He was reflecting on his life, terminal illness, and expected imminent death, while reading the meanings conveyed about life and death in FitzGerald’s translation of Omar Khayyam’s Rubaiyat—a work of art that offered TSM a practical and proven example of how one can physically die but endure in human memory and spirit forever.

This report mainly focuses on deciphering TSM’s code, but the findings are also used to shed brief new light on one and/or another alternative wider story of what took place in Adelaide in 1948, in the years leading to it, and in the decades thereafter. The report invites readers to rethink the relevance of Omar Khayyam’s poetry to the case, and also asks a pertinent question about another fold of the mystery, that is, why did it take so long to decipher a code that could have actually been decoded much earlier?

The Somerton Man or Tamám Shud case has important lessons for us beyond the confines of the personal troubles of a man and those he knew, inviting us to use our sociological imaginations to explore such troubles in relation to the public issues that concern us all beyond the shores of Australia, and beyond the national and disciplinary walls fragmenting our lives, universities, and scientific methods in favor of transcultural and transdisciplinary modes of inquiry.

The report ends with a dancing celebration for deciphering the code as a new window to learning the true story and possible identity of the Somerton Man. 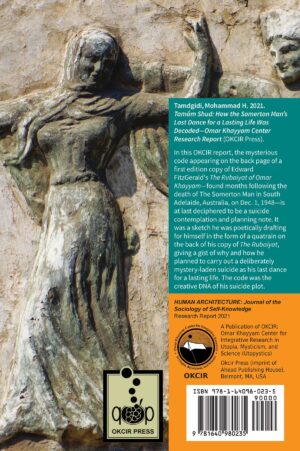 6. The Language Environment of the Code—17

7. Strategies for Making the Code Difficult to Decipher—20

8. Starting with the Last Main Line of the Code—23

16. An Alternative and/or Additional Wider Story?—68

18. Conclusion: The DNA of A Last Dance for A Lasting Life—78

To celebrate this deciphering of the Somerton man’s code, it seems fitting to watch a few clips depicting Caucasian dances, two from Russia and the Dagestan and one from Iran’s Azerbaijan. A quatrain from Omar Khayyam will bring this post to a close.

Before those clips, however, let us first watch the following clip about the wonderful story of a legendary Lezginka dancer and teacher of dancing from Dagestan, and all his students, as narrated in “The Caucasian Sensation,” in his and their own voices and lives. He offers us a glimpse into the life and the dancing art of someone like TSM. For further information, see here.

Following WWII, Russian victory and goodwill dance tours, including those from the Caucasus, were widely organized and performed throughout the West. Here is a clip from a performance in 1955 in Paris, France.

Below is a clip introduction from the Dagestan Lezginka State Dance performance (it can also be watched here):

The similarity of Robin Thomson’s clothing above (also found here) to the Dagestani dancers’s clothing above must be coincidental, but is still noteworthy. Is he unknowingly wearing TSM’s Dagestan dancing shirt gifted to him by way of his mother?

The clip below is a beautiful performance of the ancient Azeri dance Yalli by Azeri dancers. Further information about the dance can be found (in Persian) here. In English the dance and its background are introduced here. The last person in the row of the dance is traditionally called Aiaqçi (اياقچى).

May the Somerton man, Mr. Aiaqçi, dance in joy again during his second burial in the arms of his new and hopefully newly found old families. The four-lined DNA code storing his heart and mind’s story, hoping for a lasting life as sketched on the back of his Rubaiyat copy, proved resilient and telling despite the dusting of his body remains, the same having been proven time and again across the centuries by Omar Khayyam.

When before the angel’s feet I crestfallen die,
And like a bird by the angel defeathered lie,
Beware, mold my clay into nothing but this Jug,
So I may live again from its fragrant supply.

Disclaimer: This research report is published for informational purposes, and contains findings about an historical event and a person’s suicide in the past and matters pertaining to his life and death. The study is investigative and explorative, not prescriptive in any way, shape, or form. It is an effort in understanding the circumstances surrounding an event and the nature of what transpired, which include understanding hermeneutically the mind-set and perspectives held by the person or persons related to the matter of suicide. Therefore, the findings should in no way be considered as an advocacy for any decision resulting in suicide and ending human life. Life is the most precious gift anyone can receive and enjoy. If you or someone you know struggles with issues pertaining to mental and physical health or self-harm, you should directly and immediately consult a medical professional or mental health consultant in your local or wider community in the nation in which you live.