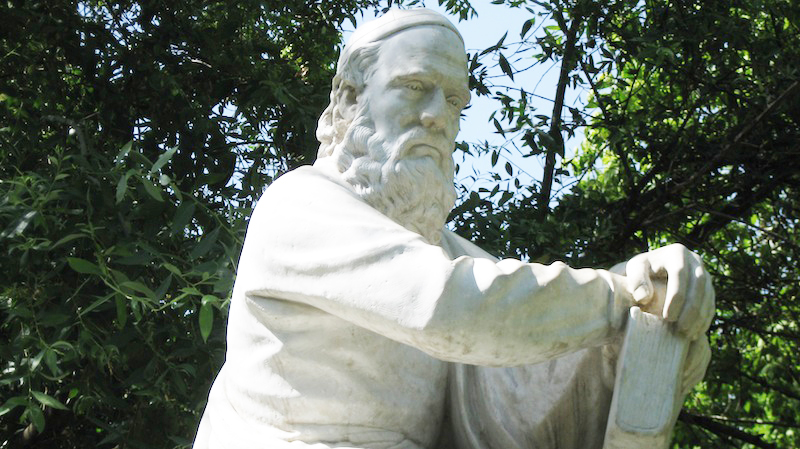 From my grave’s ruin, I still sing this line’s knowledge,
With my life, soul, Cup, and shroud, in its Wine’s mortgage,
Free of hope for mercy and fear of hell’s torments,
Free of dust, wind, fire, and water’s spoilage.

Perhaps the most widely read poet of the world, Omar Khayyam (حکیم عمر خیام نیشابوری) was born in the eleventh century near Nishapur in Khorasan, a northeastern province of Iran, and died there in the first quarter of the twelfth century. He was the son of Ibrahim from whom he inherited his surname “Khayyam”—meaning “tentmaker.” He was a contemporary of Sultan Jalaleddin Malikshah Saljuki and his famous vizier Nizam-ul-Mulk. In 1074, Khayyam was commissioned by Malikshah to revise and correct the Islamic calendar—for which he became widely known during his lifetime. Besides being a well-known astronomer, Khayyam was also known as an accomplished mathematician and philosopher. Paradoxically, however, Khayyam was not as widely known for his poetry during his lifetime. Only after his death did his robaiyat begin circulating publicly. Over the centuries, many quatrains have been attributed to him, estimates ranging from a mere handful to three hundred, or even more than a thousand. The actual number of genuine robaiyat of Khayyam still remains disputed to this day.

Khayyam has been called a mystic, sufi, hedonist, skeptic, utopian, scientist, philosopher, freethinker, materialist, and much more, being uniquely criticized and praised by voices in both religious orthodoxy and mysticism. He was not persuaded by the conventional narratives of the religious orthodoxy, nor did he identify himself with any particular mystical school. However, he was also not satisfied with the assumed certitude of the sciences and philosophical discourses of the past or his time. Khayyam’s quatrains speak of an independent spirit searching for rational answers to the paradoxes of existence. Khayyam’s poetry suggest its author’s inclinations toward a mixture of mysticism on one hand and this-worldly utopianism on the other, but identifying with neither of the crowds. He demonstrates a skeptical attitude toward the claims of both religious and secular dogma. He may have been in religious, scientific, and philosophical currents of his time; but he was not of them.

In reading the quatrains in the original, one is often struck by the creative skill with which Khayyam employs his keen sense of spatiotemporality to construct his skeptical and paradoxical interpretations of the relationship between himself and the universe as a whole. The spatiotemporal dialectics of the self, here-and-now, and universal world-history as a whole informs the paradigmatic structure of the symbolic imagery built into Khayyam’s poetry. A close reading of the robaiyat makes it apparent how Khayyam’s astronomical and philosophical pursuits found their way into the fabric of his poetry. The adoption of the surname “Khayyam” or “tentmaker” may have been a genealogical coincidence, but the imagery of a simple and detached nomadic abode in a transient earthly life perhaps provided Khayyam with a motif for the poetic reconstruction of his life’s story.

Khayyam’s poetry often journeys through various forms of spatiotemporality mediating his here-and-now selves and the world-historical universe. One can find such spatiotemporal symbolism woven into every quatrainic patch of his poetry’s tent. Khayyam’s call for drinking wine, a central theme of his work, can be better understood not in literal terms but in terms of an invitation to immortality through seeking universal self-knowledge particularly in the intoxicating moments of meditation at dawn. One may even suggest that for him, wine symbolizes the sum of the droplets of his own quatrains, perhaps created in those early morning hours when mind is clearest and least distrubed. He wants us to experience in reading his quatrains what he experienced composing them. Only those who mix with their bodies the elements of wisdom, emotion, and sensuality contained in the wine droplets of his words can begin to understand the secrets of why and how Khayyam became immortal through the spatiotemporal dialectics of his poetry. After all, Khayyam is very self-conscious of the purpose of his poetry when he writes:

When I am dead let these, my dusts, be lost away.
And read others verses from this, what’s my life’s play.
Mix these dusts of my body with your Wine, and then
Make a capstone of Wine Barrel from my clay.

Here, Khayyam invites us to scatter away his robaiyat as the dust particles of his life’s story. He asks us to take every sip in the drunken state of our meditative states so he can be resurrected in the blood vintage of our organism, becoming an inseparable part of our mind as the cap stone of the wine barrel of universal self-knowledge that must be our body. This is how Khayyam sought to immortalize himself.

It would be wrong to extrapolate the meaning of Khayyam’s views on life in general from the message contained in each of his quatrains in isolation, for each quatrain plays only a part in the drama of Khayyam’s poetry as a whole. The spatiotemporal poetics of part and whole in Khayyam’s robaiyat involve a synthesis of his multifaceted astronomical and philosophical wanderings in the universe and his everyday selves in search of rational answers to the mysteries of life, death, and immortality.

Reminding himself and his audience of the inevitability of our physical death has for Khayyam a paradigmatic significance in dehabituating and detaching humanity from the transient bonds of greed, fame, wealth, and power, directing our attention to the paradox of our journeys in cosmic space and time.

And he finds his ultimate answer to the paradox of immortality in the everlasting flow of the crystal clear okcir* of his meditative life—the creative wine droplets of his own poetry.