In this new major study in the sociology of scientific knowledge, the first volume in the series Liberating Sociology, the transdisciplinary social theorist Mohammad H. Tamdgidi reports having unriddled the puzzle of a decades-old cat gone elephant in a room of science, the quantum enigma.

Note: The ePub ebook edition of this title (ISBN: 9781640980129) can be purchased from major online ebook stores worldwide.

In this major new study in the sociology of scientific knowledge, the transdisciplinary social theorist Mohammad H. Tamdgidi reports having unriddled the puzzle of a decades-old cat gone elephant in a room of science, the quantum enigma.

This book opens the lid of the Schrödinger’s Cat box of the ‘quantum enigma’ after decades and finds something both odd and familiar: Not only the cat is both alive and dead, it has morphed into an elephant in the room in whose interpretation Einstein, Bohr, Bohm, and others were each both right and wrong because the enigma has acquired both localized and spread-out features whose unriddling requires both physics and sociology amid both transdisciplinary and transcultural contexts. The book offers, in a transdisciplinary and transcultural sociology of self-knowledge framework, a relativistic interpretation to advance a liberating quantum sociology.

Deeper methodological grounding to further advance the sociological imagination requires investigating whether and how relativistic and quantum scientific revolutions can induce a liberating reinvention of sociology in favor of creative research and a just global society. This, however, necessarily leads us to confront an elephant in the room, the ‘quantum enigma.’

In Unriddling the Quantum Enigma, the first volume of the series commonly titled Liberating Sociology: From Newtonian toward Quantum Imaginations, sociologist Mohammad H. Tamdgidi argues that unriddling the ‘quantum enigma’ depends on whether and how we succeed in dehabituating ourselves in favor of unified relativistic and quantum visions from the historically and ideologically inherited, classical Newtonian modes of imagining reality that have subconsciously persisted in the ways we have gone about posing and interpreting (or not) the enigma itself for more than a century. Once this veil is lifted and the enigma unriddled, he argues, it becomes possible to reinterpret the relativistic and quantum ways of imagining reality (including social reality) in terms of a unified, nonreductive, creative dialectic of part and whole that fosters quantum sociological imaginations, methods, theories, and practices favoring liberating and just social outcomes.

The essays in this volume develop a set of relativistic interpretive solutions to the quantum enigma. Following a survey of relevant studies, and an introduction to the transdisciplinary and transcultural sociology of self-knowledge framing the study, overviews of Newtonianism, relativity and quantum scientific revolutions, the quantum enigma, and its main interpretations to date are offered. They are followed by a study of the notion of the “wave-particle duality of light” and the various experiments associated with the quantum enigma in order to arrive at a relativistic interpretation of the enigma, one that is shown to be capable of critically cohering other offered interpretations. The book concludes with a heuristic presentation of the ontology, epistemology, and methodology of what Tamdgidi calls the creative dialectics of reality. The volume essays involve critical, comparative/integrative reflections on the relevant works of founding and contemporary scientists and scholars in the field.

This study is the first in the monograph series “Tayyebeh Series in East-West Research and Translation” of Human Architecture: Journal of the Sociology of Self-Knowledge (XIII, 2020), published by OKCIR: Omar Khayyam Center for Integrative Research in Utopia, Mysticism, and Science (Utopystics). OKCIR is dedicated to exploring, in a simultaneously world-historical and self-reflective framework, the human search for a just global society. It aims to develop new conceptual (methodological, theoretical, historical), practical, pedagogical, inspirational and disseminative structures of knowledge whereby the individual can radically understand and determine how world-history and her/his selves constitute one another. 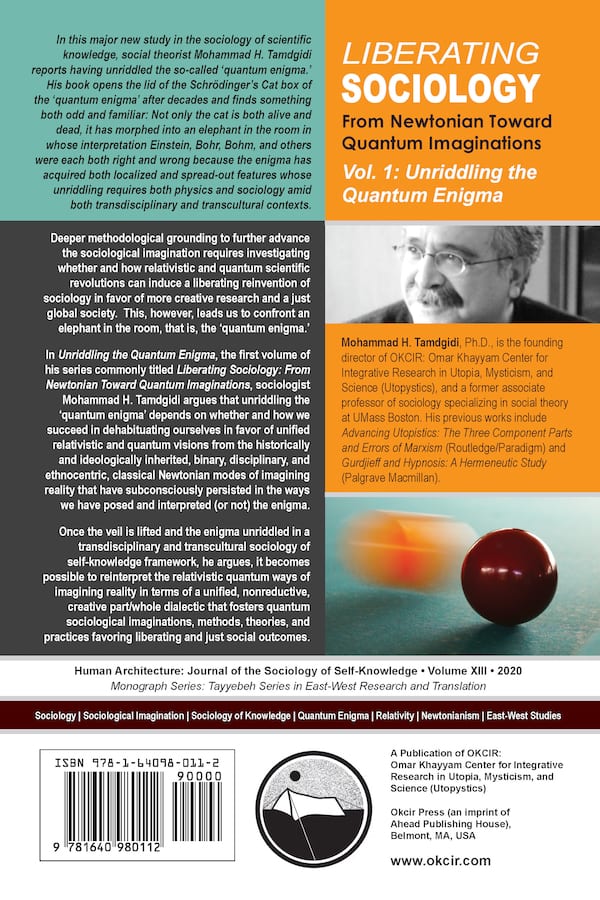 The various editions of Liberating Sociology (vol. 1) are also available for ordering from all major online bookstores worldwide (such as Amazon, Barnes&Noble, and others).

Table of Contents of Liberating Sociology: From Newtonian Toward Quantum Imaginations: Volume 1: Unriddling the Quantum Enigma

Common Preface to the Series—1

Introduction: An Elephant in the Room of Physics and the Sociological Imagination—21

I. Opening: C. Wright Mills, the Sociological Imagination, and the “Improperly Felt to Be Wonderfully Mysterious”—22

II. The Elephant in the Room that is the ‘Quantum Enigma’—29

III. The Approach and Organization of this Study—34

IV. Suggestions about Reading this Book—40

CHAPTER 1 — Quantum Society Roundtable: Prior Studies Relevant to this Work—43

I. Introduction: The ‘Implicate’ David Bohm—44

CHAPTER 2 — Ideology and Utopia in Karl Mannheim: Revisiting the Origins of the Sociology of Self-Knowledge for an Exploratory Framework—103

II. The Sociology of Knowledge and Karl Mannheim—106

VI. Inventing the Sociology of Self-Knowledge—126

(3) Separability: What is the Macro Unit of Analysis of the Object?—163

(4) Objectivity: Does the Object Being Observed Have an Independent Reality?—163

(5) Determinism: Can Causes and Consequences of Moving Objects be Predictable?—165

(6) Continuity: Does Change Happen Through Chains of Local Causations—168

(7) Disciplinarity: The Fragmentation of Knowledge of Reality—169

(8) Scientism: The Presumed Superiority of Western Way of Thinking—169

CHAPTER 4 — Whose Enigma?: From Classical Newtonianism to Relativity and the Quantum Revolution—175

(1) From Dualism to “Duality” (of Two Kinds: Complementarity and Simultaneity)—202

(4) From (Subjectless) Objectivity to (Subject-Included) Relativity—209

(5) From Determinism to Probability—211

(8) From Scientism to Transculturalism—217

CHAPTER 5 — Approaching the Elephant in the Room: The Many Interpretations of the Quantum Enigma—225

II. What Exactly Is the So-called ‘Quantum Enigma’?—229

III. ‘Classifying’ the Many Interpretations of the Quantum Enigma—238

VII. The Many Worlds and the Many Minds Interpretations—252

IX. The Consciousness Cause Interpretations—258

CHAPTER 6 — Introducing a Relativistic Interpretation: Unriddling the “Wave-Particle Duality of Light” as the Skeleton of the Quantum Enigma’s Cat Gone Elephant—269

III. An Overview of the Thought Experiments Associated with Einstein’s Special and General Theorizations of Relativity—289

IV. The Imaginal Oversight in the Thought Experiments Associated with Einstein’s Theorizations of Relativity that Engendered the Enigma of the “Wave-Particle Duality of Light”—318

V. Conclusion: The Localized/Spread-out Simultaneity of Photon As Always a Wave—363

II. The Enigma of the Double-Slit Experiment: Can an Indivisible Unit of Energy Split?—377

III. The Enigma of Quantum Entanglement: Are Not These Now Two Ends of the Same Stick?—400

IV. The Enigma of the Delayed-Choice Experiment: Does a Beam-Splitter Split Each Photon?—418

V. The Enigma of Two “Levels” of Reality: Recovering from a Misstep in the “Reality Escalator” Thought Experiment—431

CHAPTER 8 — Describing the Elephant in the Room as a Whole: Cohering With the Many Interpretations of the Quantum Enigma—473

II. Cohering Across and With Einstein’s Incomplete Knowledge and Bohr’s Copenhagen Interpretations—476

III. Cohering with the Pilot-Wave Interpretation—510

IV. Cohering Across and With the Many Worlds and the Many Minds Interpretations—518

VII. Cohering with the Ithaca, Transactional, and Quantum Logic Interpretations—538

VIII. Describing the Elephant as a Whole: Cohering the Interpretive Chunks into the Relativistic Interpretation—541

CHAPTER 9 — The Creative Dialectics of Reality: Ontology, Epistemology, and Methodology—555

V. Dialectics of the Creative Research Labor Process as a Whole—630

VI. Dialectics of the Development of “Dialectics”: An Historical Outline—635

Conclusion: The Triumph of Transdisciplinarity and the Sociology of Self-Knowledge: Toward Quantum Sociological Imaginations—649