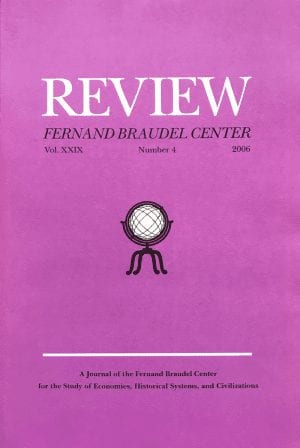 Toward a Dialectical Conception of Imperiality: The Transitory (Heuristic) Nature of the Primacy of Analyses of Economies in World-Historical Social Science

Mohammad H. Tamdgidi published the refereed article titled “Toward a Dialectical Conception of Imperiality: The Transitory (Heuristic) Nature of the Primacy of Analyses of Economies in World-Historical Social Science,” in Review (Journal of the Fernand Braudel Center for the Study of Economies, Historical Systems, and Civilizations), vol. XXIX, issue 4, 2006:291-328. This article is based on an excerpt from Tamdgidi’s doctoral dissertation titled “Mysticism and Utopia: Towards the Sociology of Self-Knowledge and Human Architecture (A Study in Marx, Gurdjieff, and Mannheim), defended and deposited at Binghamton University (SUNY) in 2002. A draft of this article had been published as a working paper titled “The Dialectics of World-History: A Guiding Thread,” in Human Architecture: Journal of the Sociology of Self-Knowledge, vol. I, issue 2, Fall 2002, pp. 109-134.

This article aims to tentatively illustrate, by way of advancing a nonreductive dialectical conception of history of imperiality in contrast to materialist approaches, both the relative historical validity and the transitory (heuristic) nature of the primacy of economies and their analyses in world-historical social science. The dialecticity of the conception allows for politics, culture, and economy to have similarly played primary parts in the rise of distinct forms of imperiality in world-history corresponding to ancient, medieval, and modern historical eras across multiple, but increasingly synchronous and convergent, regional trajectories. The nonreductive dialectical mode of analysis reverses and relativizes the taken-for-granted universalistic modes of analysis of imperialism in terms of class, allowing for considerations of political domination, cultural conversion, and economic exploitation as historical forms of deepening imperial practice violating self-determining modes of human organization and development. Power-, status-, and class-based relations and stratifications are thereby reinterpreted as distinct forms of imperial practice which now assumes a substantively generative position vis-á-vis those structural forms. The notion of “imperiality” (in contrast to “imperialism”) is used to denote both the macro-structural and the micro, intra/interpersonal, dynamics of the historical phenomena still shaping our everyday lives. The proposed mode of analysis provides new reasons for deconstructing universally economistic paths of entry into hitherto “transition debates” in favor of more contingent, historicized, and dialectical interpretations of the rise of the modern world-system and more proactive, creative, and utopistic endeavors in favor of non-imperial world-systems.