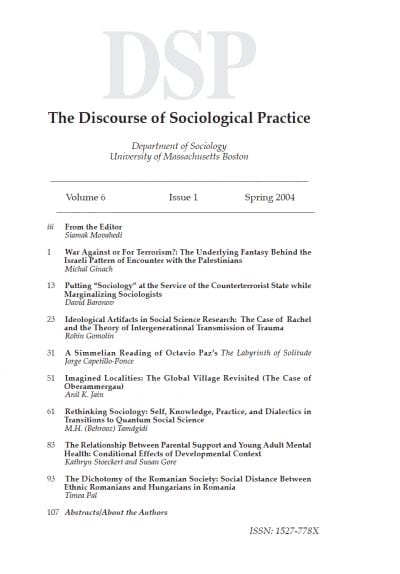 Rethinking Sociology: Self, Knowledge, Practice, and Dialectics in Transitions to Quantum Social Science

In this article Tamdgidi argues that to rethink sociology involves openness to overhaul our cherished definitional frameworks in sociology, and more specifically in the sociology of knowledge. It calls for revolutions in our social psychologies and social psychiatries. By rethinking them, we move away from our sociologies, sociologies of knowledge, and our sociological careers; we actually come closer to forging new visions to understand and transform our social realities in favor of building more harmonious social and built environments across persons and cultures. The quantum sociological imagination provides a more fruitful conceptual landscape for the study and resolution of self-destructive behaviors in larger world-historical settings, for it erases the dualistic social conceptions and structures which make them possible and necessary. It allows us to equally emphasize the liberating powers of our selves, knowledges, and theories.

This journal article can be read below. The journal issue as part of which the article was published can be accessed here.