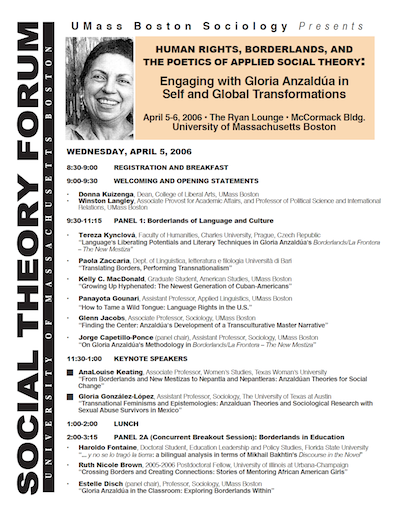 Re-Membering Anzaldúa: Human Rights, Borderlands, and the Poetics of Applied Social Theory: Engaging with Gloria Anzaldúa in Self and Global Transformations

The Third Annual Meeting of the Social Theory Forum, was held on April 5-6, 2006, at the University of Massachusetts Boston, devoted to the theme “Human Rights, Borderlands, and the Poetics of Applied Social Theory: Engaging with Gloria Anzaldúa in Self and Global Transformations.” Gloria Anzaldúa (1942-2004), a Chicana Lesbian-Feminist, poet, and cultural theorist, has been widely acknowledged for having made the literature of women of color visible in the U.S. Toward this end, Anzaldúa’s poetic and imaginative social theorizing and praxis was embraced as a framework for the exploration of liberatory and transformative symbolic interactionism in self and global landscapes along and across gender, race and ethnicity, class, age, nationality, religion, sexuality, and ability borderlands.

Walking along and crossing the borderlands of our own academic disciplines, the conference engaged with Anzaldúa’s gripping and creative talent in bridging the boundaries of academia and everyday life, self and global/world-historical reflexivity, sociology and psychology, social science and the arts and the humanities, spirituality and secularism, private and public, consciousness and the subconscious, and theory and practice. We will engage with Anzaldúa as a guiding (though not necessarily exclusive) theme to revisit and cross our own knowledge, feeling, and sensual borderlands in favor of humanizing self and global outcomes. Central in this dialogue was the exploration of human rights in personal and institutional terrains and their intersections with human borderlands, seeking creative and applied theoretical and curricular innovations to advance human rights pedagogy and practice on and off-campus.

For further information about this conference on Gloria E. Anzaldúa and its published proceedings please visit here.

The various editions of Re-Membering Anzaldúa: Human Rights, Borderlands, and the Poetics of Applied Social Theory: Engaging with Gloria Anzaldua in Self and Global Transformations are also available for ordering from all major online bookstores worldwide (such as Amazon, Barnes&Noble, and others).