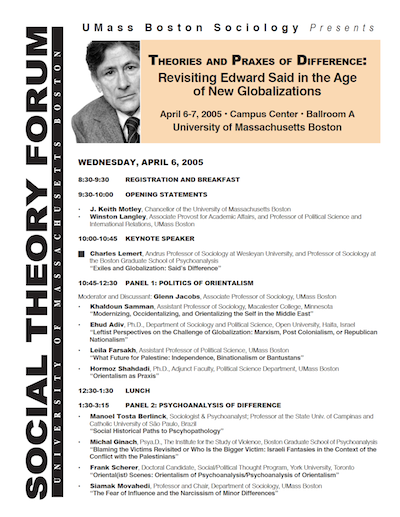 Theories and Praxes of Difference: Revisiting Edward Said in the Age of New Globalizations 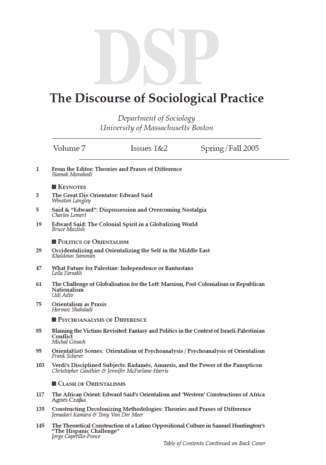 In this age of new globalizations, when technologies of mass communication and terrestrial and space transportation have made the image and the experience of our shared planet an artifact of our actual and virtual everyday lives, and seemingly brought us together in unprecedented ways, we seem to be drifting apart and fragmenting more and more. The gap between rich and poor people, regions, and nations has steadily grown world-wide; our claimed dialogues of civilizations, or discourses on class, race/ethnicity, gender, sexuality, religion, etc., have turned into clashes in disguise despite our politically-correct denials; and our United Nations has turned from an institution originally conceived to prevent imperial world-wars into an increasingly virtual opera that camouflages our imperial aspirations. The many faces of our newly discovered overt terrorisms, flagrantly vicious or subtle, often hide the deeper, long-term, and large-scale terrorisms of our old, neo-, and “post” colonialisms as embedded in our practices of economic exploitation, cultural conversion, and political repression — to such an extent that even our scholarly dialogues and theoretical discourses in search of alternatives and solutions are doubted, ridiculed, or symbolically terrorized.

The Second Annual Meeting of the Social Theory Forum, held on April 6-7, 2005, at the University of Massachusetts Boston, was devoted to the theme “Theories and Praxes of Difference: Revisiting Edward Said in the Age of New Globalizations.” The life and works of the late Edward Said, the prolific thinker, scholar, and cultural critic was revisited to serve as a guiding (though not necessarily exclusive) theme to explore our meanings and theories of difference in the applied settings of our self, global, and world-historical narratives. Said’s writings have exposed the underpinnings of the Orientalist looking glass self images of the East in the mind of the West, and ushered a lively, sophisticated, and long lasting critical dialogue in our academic and public forums—leading among others to debates on Occidentalism as well, that is, the romanticizations of the West in the eyes of the East. The conference dialogue on difference paid special attention to the context of the allegedly new globalizations of the long-inherited clashes of our colonialisms and anti-colonialisms— in the hopes of finding creative and peaceful ways out of the vicious cycles in favor of authentic selves and liberating world-histories.

From the Journal Editor: Theories and Praxes of Difference
Siamak Movahedi

Occidentalizing and Orientalizing the Self in the Middle East
Khaldoun Samman

What Future for Palestine: Independence or Bantustans
Leila Farsakh

The Challenge of Globalisation for the Left: Marxism, Post-Colonialism or Republican Nationalism
Uni Adiv

Blaming the Victims Revisited: Fantasy and Politics in the Context of Israeli-Palestinian Conflict
Michal Ginach

INTELLECTUALS AND POLITICS OF DIFFERENCE

Hegel’s Philosophy of Freedom, God, and the State as World-Historical Discourse on Power and Domination: The West Versus the Rest of the World in Edward Said’s Critical Hermeneutic
Samuel Zalanga

Differences in Difference: “Cognitive Mapping” of the Landscape of Otherness
Amil K. Jain

Discussant Commentary: Orientalism and the Poverty of Imagination
Rajini Srikanth

Veiling as Identity Politics: The Case of Turkey
Solen Sanli

Flying While Arab (Or Was It Muslim? Or Middle Eastern?): A Theoretical Analysis of Racial Profiling After September 11th
Bart Bonikowski