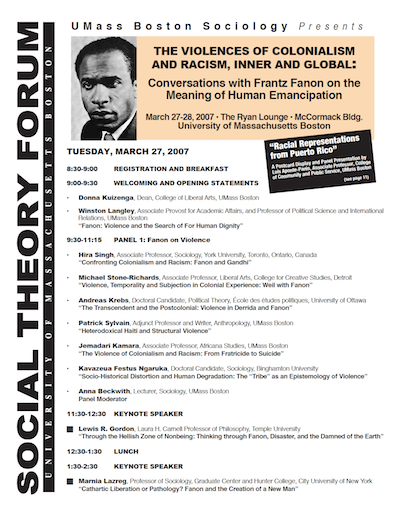 Reflections on Fanon: The Violences of Colonialism and Racism, Inner and Global—Conversations with Frantz Fanon on the Meaning of Human Emancipation

The consciousness of self is not the closing of a door to communication. Philosophic thought teaches us, on the contrary, that it is its guarantee. —Frantz Fanon, 1959

The West, proud of its beauty, has desperately sought to cleanse the images of the beast on the wall of the East—not realizing that perhaps the wall is a mirror, and the images, reflections of its own colonial adventures across the lands, peoples, and centuries. Frantz Fanon (1925-1961), the revolutionary Martinique-born French psychiatrist, thinker, and activist—and author of the classic Black Skin, White Masks (1952) and The Wretched of the Earth (1961)—spent a significant part of his short life understanding the nature of colonialism and racism and their effects on the indigenous cultures of the colonizers and the colonized, and their psyche.

Colonialism and racism do not stop at one’s skin, he observed, but penetrate the deepest recesses of one’s psyche regardless of where one stands on the colonial and racial lines. Equipped also with insights into how the oppressed have historically resisted and challenged the cultural and psychological effects of colonialism and racism, Fanon prescribed courses of action involving psychological and socio-political education and activism through writing and participation in liberatory movements (especially in the Algerian context)—approaches that have informed the tumultuous decades of debates following his passing and still inspire scholars and activists alike to simultaneously combine inner and global inquiries into the nature of oppression and liberation. Fanon’s thought has important insights into the relation of violence and oppression/liberation; interrelation of culture and psyche; racialized/colonized body and consciousness; imprisonment and torture; intersections of class, race, psyche, and revolution; and racial/colonial alienation and emancipation.

Despite the transition of overt forms of racism and colonialism to much subtler and more covert forms amidst claims for their endings, however, the present period appears to paradoxically combine a deepening of their subtler forms with an unabashed return to overtly reconstructed modes of global imperial expansion and racial differentiation and discrimination. It is timely, therefore, to revisit Fanon’s insightful joining of the micro and the macro—the everyday life and the increasingly global and world-historical— insights into critical social psychological and imaginative sociological analysis and theorizing in favor of innovative discourses on the meaning of human emancipation and toward disalienated and reimagined inner and global landscapes.

The Fourth Annual Social Theory Forum (STF), was held on Tuesday and Wednesday, March 27-28, 2007, in the Ryan Lounge at the University of Massachusetts Boston, devoted to the theme “The Violences of Colonialism and Racism, Inner and Global: Conversations with Frantz Fanon on the Meaning of Human Emancipation.”

For further information about this conference and its published proceedings in Human Architecture: Journal of the Sociology of Self-Knowledge, please visit here.

The various editions of Reflections on Fanon: The Violences of Colonialism and Racism, Inner and Global—Conversations with Frantz Fanon on the Meaning of Human Emancipation are also available for ordering from all major online bookstores worldwide (such as Amazon, Barnes&Noble, and others).