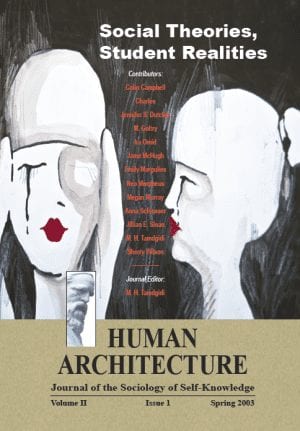 Marx, Gurdjieff, and Mannheim: Contested Utopistics of Self and Society in a World- History Context

Mohammad H. Tamdgidi published the article titled “Marx, Gurdjieff, and Mannheim: Contested Utopistics of Self and Society in a World- History Context,” in Human Architecture: Journal of the Sociology of Self-Knowledge, vol. II, issue 1, Spring 2003, pp. 102-120. An earlier version of this paper was presented to a gathering of sociology faculty at UMass Boston in March 2003. It was subsequently also presented to the “Contested Identities in a World-History Context” panel of the World History Association Conference, held during June 26-29, 2003, at Georgia State University, Atlanta, Georgia.

This paper offers a general, synoptic outline and basic argument of Tamdgidi’s comparative/integrative doctoral studies of Marx, Gurdjieff, and Mannheim. Therein, he explored the utopistic theories of Karl Marx, G. I. Gurdjieff, and Karl Mannheim as contested efforts towards the good life in self and society within a world-historical framework. He argued that the three approaches—representing western utopian, eastern mystical, and academic movements—are fragmented microcosms of an otherwise singular creative human search for the good life. Their mutual alienations, I argue, are rooted in fragmented philosophical, religious, and scientific ideologies which have emerged in conjunction with the broad historical transitions of ancient civilizations to classical political, medieval cultural, and modern economic empires. Human architecture and the sociology of self-knowledge are then introduced as creative conceptual, curricular, and pedagogical efforts beyond the contested terrains of fragmented utopistics in favor of a just global society.

The abstract of the dissertation of which this article is a synopsis is as follows:

“This dissertation explores in an integrative world-historical framework the underlying paradigmatic causes of failure of past utopistic efforts towards a just global society. The conceptual structures of three western utopian, eastern mystical, and academic approaches represented in Marx, Gurdjieff, and Mannheim are studied using a postdeterminist dialectical methodology.

Contributions are: (1) problematizing Marx’s dialectic itself as a cause of failures of his doctrine; (2) an independent academic assessment of the teaching of Gurdjieff, the Caucasian mystic, using all his writings; (3) transforming Mannheim’s sociology of knowledge into a sociology of self knowledge to help revitalize his intentions while avoiding his self-defeating arguments; (4) developing a conceptual synthesis beyond the three teachings within an alternative “human architecture” paradigm; (5) advancing a nonreductive dialectical method cognizant of the challenge posed by subconsciousness in mediations of mind and matter.

A fundamental explanation for human failures in bringing about radical change is found to be the problem of habituation, i.e., the human propensity to become subconsciously attached to sensations, ideas, feelings, things, relations, and processes. The key obstacles are identified as the habituated dualisms of mind/matter, self/society, and theory/practice—responsible for the world-historical splitting of the essentially creative human search for the good life into mutually alienated philosophical utopian, religious mystical, and scientific academic movements corresponding to the transitions from ancient civilizations to classical political, medieval cultural, and modern economic empires. The good life cannot be the gift of a wise few, of supernatural forces beyond, or of an objectively preordained progress. Human de-alienation can only be an artful endeavor by each and all—only creative humanism can overcome the habituated fragmentations of utopistic efforts in favor of the good life.

The study posits that all dualisms can be transcended through their re-articulation as manifestations of part-whole dialectics. The habituated definition of society as “multiple” ethno-national or civilizational systems of relations among “individuals” is rejected in favor of its definition as a singular world-historical ensemble of intra-, inter-, and extrapersonal self relations. It is argued that human life can be harmonious only when it is a world-system of self-determining individualities. World-history is viewed as a process of splitting of human life into a habituated east-west civilizational dualism whose transcendence is dependent on creative, conscious, and intentional human effort. The sociology of self-knowledge and human architecture are introduced as the study and practice of spatiotemporal part/whole dialectics between here-and-now self-identities and world-historical social structures. Utopistics cannot advance without utopistic universities.”