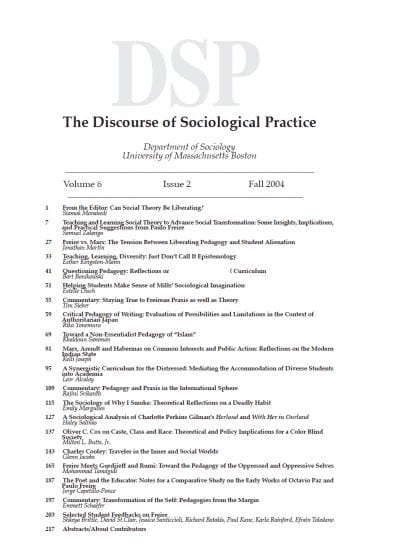 Freire Meets Gurdjieff and Rumi: Toward the Pedagogy of the Oppressed and Oppressive Selves

Mohammad H. Tamdgidi published the refereed article titled “Freire Meets Gurdjieff and Rumi: Toward the Pedagogy of the Oppressed and Oppressive Selves,” in Discourse of the Sociological Practice (Journal of the Sociology Department at UMass Boston), vol. 6, issue 2, 2004:165-185.

In this article, Tamdgidi revisits Paulo Freire’s Pedagogy of the Oppressed in order to critically reinvent his contributions to liberatory social theorizing and practice while noting the shortcomings of his approach. He argues that Freire’s pedagogy would more effectively serve liberatory praxis if the Newtonian sociological structure of his pedagogy is abandoned in favor of quantal sociological imaginations whereby the dialectics of oppression and liberation are conceived intrapersonally as well, as part of an open-ended, non-reductivist, and unpredictable pedagogical praxis that also takes into consideration the multiplicity of human selfhood on one hand and, on the other, the significant challenge posed by the human subconscious mind for the transcendence of oppressive human interactions within and without. The teaching of G. I. Gurdjieff, the Caucasian philosopher, mystic, and teacher of esoteric dances, exercises, and movements, is critically conferred to arrive at a quantal sociological reimagination of the Freireian pedagogical approach while using the occasion of the dialogue with Freire to highlight and transcend the one-sided formulations implicit in Gurdjieff’s own introspective theory and practice of liberatory human development.