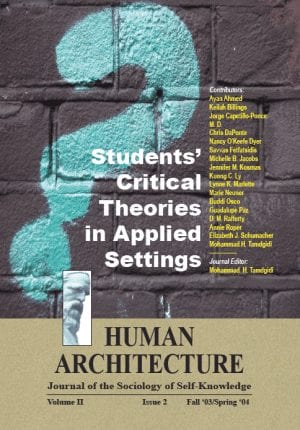 De/Reconstructing Utopianism: Towards A World-Historical Typology

Mohammad H. Tamdgidi published the article titled “De/Reconstructing Utopianism: Towards A World-Historical Typology,” in Human Architecture: Journal of the Sociology of Self-Knowledge, vol. II, issue 2, Fall 2003/Spring 2004, pp. 125-141. It is based on an excerpt from Tamdgidi’s doctoral dissertation titled “Mysticism and Utopia: Towards the Sociology of Self-Knowledge and Human Architecture (A Study in Marx, Gurdjieff, and Mannheim), defended and deposited at Binghamton University (SUNY) in 2002. An updated version of this article was later published as a chapter in Tamdgidi’s Advancing Utopistics: The Three Component Parts and Errors of Marxism (2007/2009, originally published by Paradigm and now a Routledge title).

According to Tamdgidi, Marxism represented a new, “scientific,” type of utopian movement in contrast, on one hand, to the philosophical and religious varieties preceding it, and on the other hand the briefly revived humanist type (as somewhat represented by utopian socialists) which was soon frozen in embryo by Marxism’s own ideological-political rhetoric and ascendance in the world-wide opposition to capitalism. What Tamdgidi posits is a need to go beyond the polemics and the rhetoric of these movements in order to develop a typological framework of utopianism which accounts for the historical failures of Marxism due in part to the shortcomings emanating from its specific utopian type and partly due to its gradual departure from the utopian typology altogether. The point is to redeem the value of utopianism as a specific strategy for social change in contrast to the antisystemic mode characterizing the dominant form of opposition movements to capitalism during at least the past two centuries.