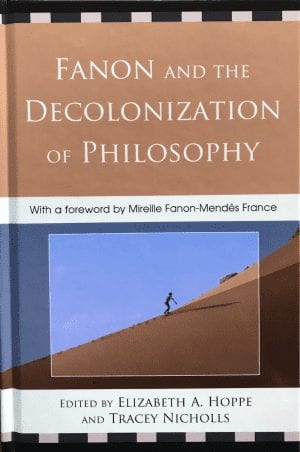 Decolonizing Selves: The Subtler Violences of Colonialism and Racism in Fanon, Said, and Anzaldúa

Mohammad H. Tamdgidi published the chapter titled “Decolonizing Selves: The Subtler Violences of Colonialism and Racism in Fanon, Said, and Anzaldúa,” in Fanon and the Decolonization of Philosophy, a collection edited by Elizabeth A. Hoppe and Tracey Nichols, with a foreword by Mirelle Fanon-Mendes France. The volume was published by Lexington Books, A Division of Roman & Littlefield Publishing Group, in 2009.

How were Frantz Fanon, Edward Said, and Gloria Anzaldúa personally troubled by the violences of colonialism and racism in their respective Martinican/African, Palestinian/Arab, and Chicana/Mexican regional historical contexts? And how did such personal experiences motivate and explain—and how were they in turn informed by—their highly visible public intellectual discourses and actions? In this chapter, Tamdgidi comparatively explores the sociological imaginations of colonial and racial violence in the writings of Fanon, Said, and Anzaldúa, seeking to identify the theoretical and broader philosophical implications such a study may have for de-colonizing selves and for advancing human emancipatory discourses and practices.

Fanon’s ideas and activism have often been associated with an advocacy for cruder forms of revolutionary response to the violence brought on by colonialism and racism. Revisiting such misinterpretations of Fanon’s work in conversation with Said’s and Anzaldúa’s writings, Tamdgidi argues that the differing (respectively embracing, ambiguous, and rejective) responses of the three intellectuals regarding revolutionary physical violence is reflective of the regional historical conditions of colonialism and racism confronting each intellectual. He argues, further, that what commonly motivated the highly visible and committed public discourses and struggles of these three public intellectuals were their sensitivity to deeply troubling and much subtler personal experiences of racism and colonialism each had endured in their lives, especially experiencing an alienated/ing multiply-selved landscape within that accommodated both the victimhood and the perpetration of racial and colonial identities and practices in oneself. It is one thing to witness and be a victim of racial prejudice and colonial oppression in and by others, and another to realize that one and one’s loved ones have been turned into perpetrators of, or accomplices in, the same, at times against oneself.

The study points to what has been previously proposed as a need to move beyond Newtonian and toward quantal sociological imaginations whereby the presumed atomic “individual” units of sociological analysis and practice are problematized and transcended in favor of recognizing the strange, sub-atomic and quantal, realities of personal and broader social lives in terms of relationalities of intra/inter/extrapersonal selfhoods. Such exercises in the sociology of self-knowledge may more effectively accommodate the subtler realization that one may be at the same time not only an oppressor and an oppressed vis-à-vis others, but also an oppressor of oneself—an awakening that is indispensable for pursuing what Fanon called the “total liberation” of humanity.

For more information about the volume, please visit here. The volume can also be ordered here.