Note: The ePub ebook edition of this title (ISBN: 9781640980044) can be purchased from major online ebook stores worldwide.

Omar Khayyam’s Secret: Hermeneutics of the Robaiyat in Quantum Sociological Imagination is a twelve-book series of which this book, subtitled New Khayyami Studies: Quantumizing the Newtonian Structures of C. Wright Mills’s Sociological Imagination for A New Hermeneutic Method, is the first volume. Each book is independently readable, although it will be best understood as a part of the whole series.

In the overall series, the transdisciplinary sociologist Mohammad H. Tamdgidi shares the results of his decades-long research on Omar Khayyam, the enigmatic 11th/12th centuries Persian Muslim sage, philosopher, astronomer, mathematician, physician, writer, and poet from Neyshabour, Iran, whose life and works still remain behind a veil of deep mystery. Tamdgidi’s purpose has been to find definitive answers to the many puzzles still surrounding Khayyam, especially regarding the existence, nature, and purpose of the Robaiyat in his life and works. To explore the questions posed, he advances a new hermeneutic method of textual analysis, informed by what he calls the quantum sociological imagination, to gather and study all the attributed philosophical, religious, scientific, and literary writings of Khayyam.

In this first book of the series, following a common preface and introduction to the series, Tamdgidi develops the quantum sociological imagination method framing his hermeneutic study in the series as a whole. In the prefatory note he shares the origins of this series and how the study is itself a moment in the trajectory of a broader research project. In his introduction, he describes how centuries of Khayyami studies, especially during the last two, have reached an impasse in shedding light on his enigmatic life and works, especially his attributed Robaiyat.

The four chapters of the book are then dedicated to developing the quantum sociological imagination as a new hermeneutic method framing the Khayyami studies in the series. The method builds, in an applied way, on the results of Tamdgidi’s recent work in the sociology of scientific knowledge, Liberating Sociology: From Newtonian Toward Quantum Imagination: Volume 1: Unriddling the Quantum Enigma (2020), where he explored extensively, in greater depth, and in the context of understanding the so-called “quantum enigma,” the Newtonian and quantum ways of imagining reality. In this first book, he shares the findings of that research in summary amid new applied insights developed in relation to Khayyami studies.

It was during his undergraduate studies at U.C. Berkeley and in the course of his mentorship by the painter and design architect Jesse Reichek (1916-2005) that Tamdgidi’s notion and project “human architecture” was born. During his graduate studies at SUNY-Binghamton, he was mentored in methods, theory, and world-systems studies by Terence K. Hopkins (1928-1997) and Immanuel Wallerstein (1930-2019), and further in dialectics by Dale Tomich and on space and society by Anthony D. King, amid a uniquely autonomous and flexible transdisciplinary Graduate Program in Sociology founded by T. K. Hopkins. 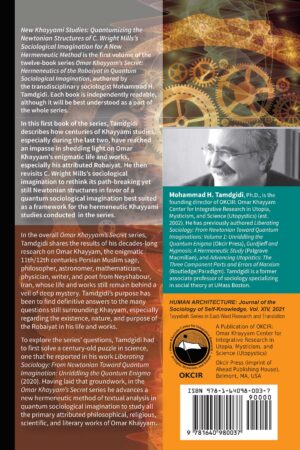 Published to Date in the Series—ii

Preface to the Series: Origins of This Study—1

Introduction to the Series: The Enigmatic Omar Khayyam and the Impasse of Khayyami Studies—9

1. The Problem of Dualism: Can Personal Troubles Be Also Public Issues, and Vice Versa?—33

2. The Problem of Atomism: Which Self’s Personal Trouble Is It?—36

3. The Problem of Separability: Whose Public Issues Are These?—38

4. The Problem of Objectivity: Can We as Observers Separate Ourselves from Others’ Personal Troubles and Public Issues?—43

5. The Problem of Determinism: Is It Always the Case that Only Society Shapes the Individual/Self, and That Only Public Issues Shape Personal Troubles, and Not Also the Other Way Around?—48

6. The Problem of Continuity: Are We Supposed to Find Causal Relations Amid Easily Locatable and Traceable Causal Chains?—53

7. The Problem of Disciplinarity: Are We Always Better Off Dividing and Specializing Our Knowledges Into Fragmented Disciplines?—55

8. The Problem of Scientism: Is Science Always Western, and Still Newtonian?—57

2. Atomism: What Is the Micro Unit of Analysis of the Object?—72

3. Separability: What Is the Macro Unit of Analysis of the Object?—82

4. Objectivity: Does the Object, While Being Observed, Have An Independent Reality?—86

5. Determinism: Are Causes and Consequences In Objects Certain and Predictable?—92

6. Continuity: Is Influence Exerted Through Chains of Local-Causations?—96

7. Disciplinarity: Fragmenting Our Knowledge of Reality?—98

8. Scientism: Presuming the Superiority of Western, Newtonian Way of Thinking?—99

1. Relating Personal Troubles and Public Issues: From Dualism to Simultaneity (Not “Duality,” Nor “Complementarity”)—126

2. Relating Personal Troubles (or Not) of Many Selves: From Atomism to Superpositionality—131

4. Relating the Sociological Imaginations of Others to Those of Ourselves: From Subjectless Objectivity to Relativity (Subject-Included Objectivity)—142

8. Reimagining Science: From Eurocentrism to Transculturalism—161

CHAPTER IV—Hermeneutics of the Khayyami Robaiyat in Quantum Sociological Imagination: Source Availability and Matters of Secrecy—177

1. The Availability of Sources on Omar Khayyam—178

2. Prioritization and Superpositions of Available Sources on Khayyam—190

3. Khayyami Studies and the Hermeneutic Method—195

4. On Secrets and Being Secretive—204

Conclusion to Book 1: Summary of Findings—215

Figure 3.1: Visual Representations of the Quantum Way of Thinking about the Sociological Imagination—173