Terence K. Hopkins (d. 1997) was a hidden gem of world-systems studies who contributed indispensably to its foundation amid a lifelong collaboration with Immanuel Wallerstein. In this book, Hopkins’s students discuss what made him so impactful in shaping their practices of sociology-informed by an always self-reinventing World-Systems Analysis. This new twentieth anniversary edition includes a comprehensive chronological works/citations bibliography of Terence K. Hopkins, a new postscript essay reflecting and building on other contributions in the volume, updates on the contributors’ background and works, a reorganized photo gallery and cover design, and a detailed subject index that can be a helpful guide to the many aspects of Hopkins’s thought and pedagogy from the points of view of his students/colleagues.

Note: The ePub ebook edition of this title can be purchased from major online ebook stores worldwide.

Description of Mentoring, Methods, and Movements: A Colloquium in Honor of Terence K. Hopkins

From the Inside Pages of Mentoring, Methods, and Movements: A Colloquium in Honor of Terence K. Hopkins

“… I knew instinctively from the moment I came to Binghamton that this whole system was right, but I couldn’t figure out why it was right. I knew also that it was different. And it’s only over the years that I came to realize what this has to do with world-systems analysis.

“Basically, the concept is based on the assumption that all of us — professors, graduate students, world-renowned scholars — are in a beginning learning phase of our scholarly existence, collectively as well as individually. This is precisely the opposite of the assumption underlying standard oral/written exams, that the professors are in an advanced phase of knowledge, and the graduate students have to be taught what the professors already know.

“There is indeed a second assumption, which is that graduate students have in fact something to teach the professors ­even in their first year, certainly by the third, fourth, or fifth year. The students probably end up knowing a lot more about the fields they invented than the people who were in fact questioning them. The idea that graduate students had something to teach was also linked, and I’ll come back to that, to world-systems analysis.

“The third assumption is that what the student is doing is very hard work. There should be no pretense that it’s easy. The student has to spend endless amounts of energy doing an awful lot of reading and thinking. There is no text metaphorically which one can just learn. The putative scholar has to invent. What this really says and comes back to our collective methodological concerns is that the scholar can’t be nomothetic. There are no sets of accumulated laws which one can digest and then proceed from that point. They don’t exist. And there are no canons. There are no sort of aesthetic models or intellectual models which the student just has to absorb.

“Hopkins was attacking the idiographic-nomothetic distinction through the pedagogy. The pedagogy assumed that the student had to work hard as a student “inventing” and then had to continue inventing forever after. …”

To commemorate the life and preserve the legacy of Terence K. Hopkins on the occasion of the twentieth anniversary of his passing on January 3rd, 1997, please recommend this book to your affiliated university/public library for acquisition in print and/or digital formats.

The various editions of Mentoring, Methods, and Movements: Colloquium in Honor of Terence K. Hopkins by His Former Students and the Fernand Braudel Center for the Study of Economies, Historical Systems, and Civilizations can be ordered from the Okcir Store and are also available for ordering from all major online bookstores worldwide (such as Amazon, Barnes&Noble, and others).

Table of Contents of Mentoring, Methods, and Movements: A Colloquium in Honor of Terence K. Hopkins

I. Graduate Education: The Formation of Scholars

7. Philip McMichael
The Global Wage Relations as an Instituted Market 57

9. Beverly Silver
The Time and Space of Labor Unrest 83

10. Rod Bush
Hegemony and Resistance in the United States: The Contradictions of Race and Class 89

12. Lu Aiguo
From Beijing to Binghamton and Back: A Personal Reflection on the Trajectory of Chinese Intellectuals 115

Coda 143 [view in the video clip below Terence K. Hopkins’s final address to the Colloquium] 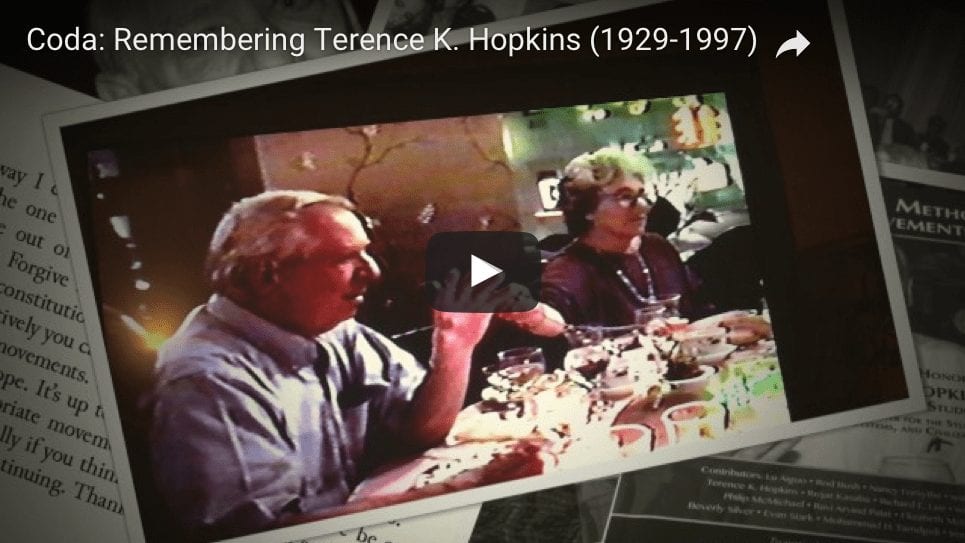 From the Contributors of Mentoring, Methods, and Movements: Colloquium in Honor of Terence K. Hopkins by His Former Students and the Fernand Braudel Center for the Study of Economies, Historical Systems, and Civilizations

“For several years now we sociologists have heard much talk about structure and agency as if they referred to different phenomena or to radically distinct aspects of the same thing. This distinction can make little sense to students of Hopkins, who always insisted that social structures are formed, reproduced, and reformed by the agency of actors. …” —Walter Goldfrank, U.C. Santa Cruz

“How did Terry do it?” —William G. Martin, Binghamton University

“… Hopkins’s insistent questioning opened the door to the creation of an alternate apparatus of discourse, the very flexibility of which allows the emerging debates of world-scale historical social sciences to be joined however tenuously.” —Ravi A. Palat, Binghamton University

“… Hopkins was attacking the idiographic-nomothetic distinction through the pedagogy. The pedagogy assumed that the student had to work hard as a student “inventing” and then had to continue inventing forever after.” —Immanuel Wallerstein, Yale University

“… But then again I cannot think of a better way to reflect on Hopkins’s work than approaching it from a personal perspective. That is how he always approached his own work, after all, and he encouraged us to do so as well.” —Resat Kasaba, University of Washington

“… the subtext of that magnificent modesty which permeates the work of Terence Hopkins as scholar and teacher, and student of students, as I read it, has always been to go beyond established modes … The vision of methods Terence Hopkins has offered includes this invitation to a special sort of imaginative social action: think the past to make a past with the purpose of making the future by thinking a future.” —Richard Lee, Binghamton University

“This is not going to be a personal speech, but the invisible hand of Terence K. Hopkins lies about me and in most of what I’ve written since I left Binghamton. … (Somebody observed there are many Hopkinses. It’s very clear that Hopkins is a rich totality of many determinations and relations.)” —Philip McMichael, Cornell University

“The study of regionalism vis-à-vis globalism parallels the two poles of Terence Hopkins’s own intellectual development which began with the study of small group interaction and culminated with a focus on the dynamics of the world-system. …” —Elizabeth McLean Petras, Scholar and Author

“Hopkins’s comments are on his characteristic yellow-lined paper, handwritten comments with a #2 pencil. The first line reads “… It’s very good, but ….” Then comes the “but”—one, two, three, four pages of “but.” … even the Hopkins phrases were not immune to skeptical support. Exhibiting his characteristic penchant for sustained auto-critique, Hopkins wrote in the margins of the paper …” —Beverly Silver, Johns Hopkins University

“… my association with Terence Hopkins changed my life. He deepened my understanding of world-systems, he taught me what it meant to be a scholar who was deeply concerned about the movements; he was a role model for how to be a committed intellectual. … He was a tireless and merciless critic. Yet I never felt demeaned or belittled. … He pounded home time and again that it was not helpful to view race and class as binary opposites, ….” —Rod Bush (1945-2013), St. John’s University

“… key points in the work of Hopkins elucidate productive ways of meeting the criteria set by feminists for the study of gender. … World-systems analysis has thus far not dealt with subjective and objective, self and society as dimensions of the modern world-system. Critique of these as discrete units of analysis is implicit in world-systems analysis, but focused attention on these is the contribution of feminist theory to the discussion of unit of analysis.” —Nancy Forsythe, Feminist Scholar and Activist

“… The time I was fortunate to spend with him allowed me to have a sense of his profound concern about the welfare of humanity and commitment to the cause of the unprivileged ….” —Lu Aiguo, Inst. of World Economies and Politics, Chinese Academy of Social Science, Beijing

“It was not what Hopkins actually said to me that mattered, not his educational program nor even his parenthetical letters, but what he is (and now what he was), a style of being alive, a magical dance he does with his body or with you or with parts of who he was that had failed him, or weren’t there to begin with, a dance in which he laughs, turning away just enough to help you see it is not you he is laughing at, but us.” —Evan Stark, Rutgers University

“… It’s up to the movements to appropriate us. It’s up to us to appropriate movements. I wish only that there be a continuation of this, really if you think about it on a world scale, odd solidarity. It is worth continuing. Thank you.” —Terence K. Hopkins (1929-1997), Binghamton University

“Gathered in this volume … are sociologically imaginative world-systems analyses of Terence K. Hopkins, amid the world-historical public issues that deeply troubled him personally and are even more prevalent today.” —Mohammad H. Tamdgidi, UMass Boston / OKCIR