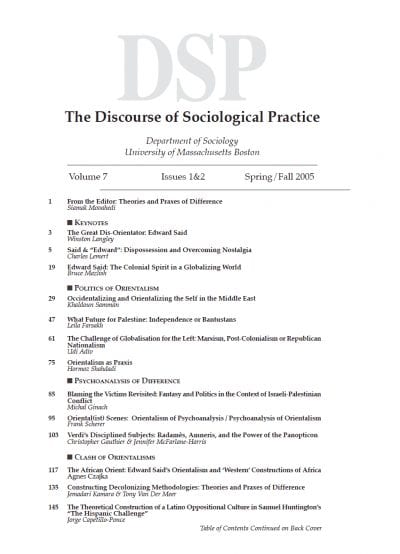 Orientalist and Liberating Discourses of East-West Difference: Revisiting Edward Said and the Rubaiyat of Omar Khayyam

Mohammad H. Tamdgidi published the refereed article titled “Orientalist and Liberating Discourses of East-West Difference: Revisiting Edward Said and the Rubaiyat of Omar Khayyam,” in Discourse of the Sociological Practice (Journal of the Sociology Department at UMass Boston), vol. 7, issue 1&2, 2005:187-201.

In reaction to Samuel Huntington’s thesis of the “clash of civilizations” and its dualistic formal logic presuming an essential and unbridgeable East-West difference, world-system analyses tend to move to the opposite extreme, dismissing possible East-West cultural differences amid the presumed singularity of the modern world-system. The aim of this article is to note the limits of both of these polar positions and modes of argumentation, noting how a common, essentialist logic is reproduced in the clash of the opposites in the debate. Drawing on Edward Said’s Orientalism (1979)—given how his work is often evoked to advance the critique of the East-West binary—Tamdgidi suggests that it is important to distinguish between Said’s critique of the frozen East-West binary in the orientalist imperial mindset and the substantive points he makes regarding possible, geo-historically grounded, and more or less enduring, cultural differences in reality. Said insisted that human history is a history of constant reciprocity and exchange of presumably different ideas and influences across cultures and traditions, and his Orientalism did not altogether aim to address the issue of what the East, the Arab world, or Islam actually represent. Besides, certain limits to Said’s argumentation arising from its historical and biographical origins should also be noted. Essentialist modes of thinking, dualizing or totalizing alike, limit comparative/integrative exercises in utopistic analyses of realistic historical alternatives to the modern world-system because they gloss over the borderlands of cultural differences, surviving and/or newly emergent, which can provide the creative grounds for advancing new world orders, inner and global, in favor of a just society.