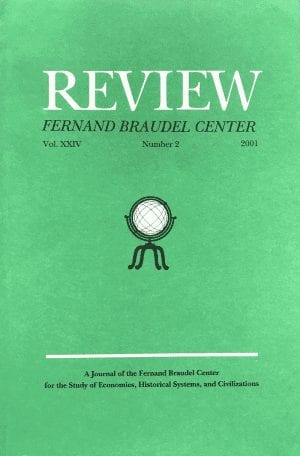 Open the Antisystemic Movements: The Book, the Concept, and the Reality

Mohammad H. Tamdgidi published the refereed article titled “Open the Antisystemic Movements: The Book, the Concept, and the Reality,” in Review (Journal of the Fernand Braudel Center for the Study of Economies, Historical Systems, and Civilizations), vol. XXIV, issue 2, 2001:299-336.

Treating the book Antisystemic Movements (Arrighi, Hopkins & Wallerstein, 1989) as an empirical site for conceptual exploration, this article aims to contribute to the newly revitalized debates in world-systems studies on realistic alternatives to historical capitalism. The article calls for the opening of our prevailing notions of antisystemicity in world-systems studies in favor of othersystemic, cultural, self-reflexive, world-historical, and inductive interpretations and praxes of social change. This can open our visions to the reality and significance of alternative approaches to antisystemicity whose challenges to the social status quo throughout world-history have been effected primarily not through reactive oppositional strategies, but through proactive modes of design and/or construction of alternative inter- and/or intrapersonal social realities. Western utopianism and Eastern mysticism are examples of these movements which have variously challenged in their own ways the world-historical or intrapersonal systemicities of alienating societies. The fact that these movements, like their modem antisystemic counterparts, have been more or less failing does not necessarily diminish their intellectual or practical value in the search for realistic historical alternatives to capitalism. Drawing upon the legacy of Terence K. Hopkins (1928-97) in the area of sociological pedagogy, this article concludes that the opening of the book and the concept Antisystemic Movements can be fruitfully advanced by further opening the innovative academic channels of humanist utopistics the authors of Antisystemic Movements have themselves been constructing in recent decades.