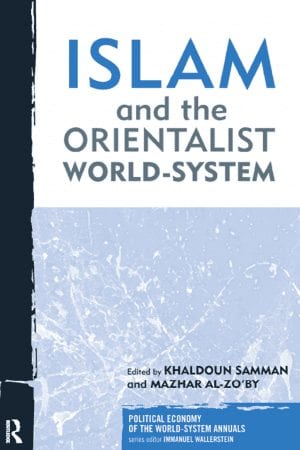 From Utopistics to Utopystics: Integrative Reflections on Potential Contributions of Mysticism to World-Systems Analyses and Praxes of Historical Alternatives

Mohammad H. Tamdgidi published the chapter titled “From Utopistics to Utopystics: Integrative Reflections on Potential Contributions of Mysticism to World-Systems Analyses and Praxes of Historical Alternatives,” in The Islam and the Orientalist World-System, a collection in the Political Economy of the World-System Annuals series, volume XXIX, edited by Khaldoun Samman and Mazhar Al-Zo’by, and Immanuel Wallerstein (series editor). The volume is now published by Routledge (originally a Paradigm Publishers’ title published in 2008).

In the chapter, integratively drawing on the subaltern voices of mysticism informing the works of Khayyam, Rumi, Gurdjieff, and Anzaldúa, Tamdgidi argues that certain inherited orientalist attitudes constraining the structures of knowledge in world-systems studies fetter the advancement of comparative, self-reflective as well as world-historical, exercises in utopistics. Among these constraints are the universalistic primacies assigned to macro vs. micro, political economy vs. culture, structure vs. agency, and anti- vs. othersystemic movements. Cardinal among them, however, is the dualistic construction of society vs. self and the resulting universalistic primacy attributed to the former in knowing and changing the world.

Tamdgidi argues that these constraints on world-systems analyses and praxes of historical alternatives have ultimately emanated from the choice of proper unit of analysis that originally inspired and subsequently framed world-systems studies. Adopting the world-system as a singular unit of analysis has served and will continue to serve as an important methodological tool in understanding the nature of the modern world at the macro level—the need for particular attention to local geo-historical realities notwithstanding. However, selectively drawing on the contributions of mysticism as a world-historical tradition, he proposes that using a singular macro unit of analysis should not prevent us from recognizing multiple, fragmented and alienated, selves as systemic products that in turn perpetuate all (including the modern) oppressive social systems. This calls for adopting interacting selves—and not presumed “individuals”—as micro units of analysis which, coupled with the singular macro analytical framework, can more fruitfully bring about radical knowledge of and transformation in the modern world-system in favor of utopistic inner and global outcomes.

For more information about the volume, please visit here. The collection can be ordered here.